Today we have a guest post from Kate Jordan, a historian currently working at the Ministry for Culture and Heritage.  She wrote about this building while completing her post-graduate studies in Museum and Heritage Studies at the Victoria University of Wellington.

In downtown New Plymouth is a rather small, unassuming building. Its demolition has been raised twice in recent years and each time, public outcry saved it. It can also tell us a lot about New Zealand’s history of gendered spaces and ideas about a women’s place in the world. There are various similar buildings spread throughout New Zealand. So, what is it?  The Women’s Rest Rooms.

A Short History of Public Toilets in New Zealand

In the 1860s, increasing population density raised concerns about sanitation and public morality in New Zealand. Civil authorities in larger urban areas like Auckland and Dunedin began to provide men’s public urinals, but women had to wait many decades before being granted such spaces. This discrepancy may have occurred because women were not seen as participating in civic life. The design of civic buildings reflects this concept: the Auckland and Dunedin town halls and the Dunedin courts were originally built without women’s toilets.

Women resorted to ‘semi-public’ toilet facilities, such as communal provisions at the rear of residential houses, the facilities at small businesses, or simply not drinking before heading into town. Gradually, calls for women’s public convenience were heard: Dunedin erected women’s public toilets in 1909 and Auckland in 1910.

In the early 1920s, ideas around women’s public facilities changed from merely toilet facilities to rest rooms, where women could relax, look after children, and have a private space within the public sphere. Annabel Cooper et al argued that this shift came about because of the emphasis of women as mothers in the 1920s and because the more elaborate rest room had ‘less emphasis on women as creatures with a need to urinate or worse and more on women as mothers, as creatures with a need to rest’.

Examples of this new type of public facility can be seen throughout New Zealand. Marton, Whanganui, and Auckland central have extant women’s rest rooms from the 1910s and 1920s that show that the new buildings took on a homely appearance, drawing from the Arts and Crafts and bungalow styles of architecture. The relaxed, cosy style reflected the new usage and ideas around public toilets for women.

New Plymouth then moved providing public toilets to rest rooms. The first rest rooms was provided in 1924, when facilities were added to the Plunket Rooms, a semi-detached cottage on Courtney Street. Ten years later, though, these were run down and underutilised. The Women’s division of the Farmers’ Union had their own (admittedly small) rooms and the borough considered expanding these, but this never eventuated.

Instead the Chief Inspector recommended the old septic tank site by the Huatoki Stream, which was accessible, yet private, and ‘capable of beautifying’. The new rest rooms, he thought, should have more the ‘usual lavatories and wash-basins’, with facilities for mothers and children.

Architects Griffiths and Stephenson were commissioned to produce plans, which were approved by the Council, and the successful tenderer was Boons Bros. The building had delays, such as normal construction hold ups (they had to wait for reinforcing steel to arrive from Australia) and some more unusual. The foundations of the building presented some challenges, as most of the ground was loose fill. Eventually it was decided to move the building one foot to the east and place one of the wall’s foundations on top of the old septic tank.

The Rest Rooms had no formal opening, but it was well received in the newspapers when it was completed in 1935. The Taranaki Daily News reported that ‘The inside of the building is a happy blend of comfort and utility’. It praised the north-facing windows, private room for mothers and babies, and central location, noting ‘This access will be particularly appreciated by country visitors’.

In the late 1930s and 1940s, the Rest Rooms was open ‘practically the same hours as the shops’, except on Monday and Wednesday when it stayed open later to accommodate those waiting for the Auckland train.

There is evidence throughout from the 1930s through to at least the mid-1960s that the borough actively maintained the Rest Rooms and ensured it catered to local women’s needs. In 1939, the Chief Inspector wrote to fifty women’s clubs and institutes in North Taranaki asking their opinion of the Women’s Rest Rooms. Some replies made ‘very flattering reference’ to the Rooms.

Local pride countered another male politician’s ideas when in 1995 New Plymouth councillor and mayoral candidate Lynn Bublitz called for the building’s removal to make way for a town square. He quickly retracted this idea in the face of public backlash and some theorise it may have cost him the election. Despite this set back, Bublitz again threatened the rest rooms. He was now deputy mayor and project manager of the Huatoki Plaza redevelopment. The local newspaper reported ‘He and his fellow planners reckon the [Rest Rooms], despite its charm, would tower incongruously above the proposed terracing planned for the riverbank between Ariki and Devon streets’. The planners argued that the building should not be allowed to stand in the way of an $8 million development.

The planners reckoned, however, without the depth of feeling New Plymouth had for its Rest Rooms. A petition circulated by the New Plymouth Women’s Centre (a separate organisation) collected 3,500 signatures and letters came from around New Zealand and the world. A deputation to the Council suggested that the Rest Rooms had other benefits, such as preventing wind from blowing through the plaza and alleviating the view of the strikingly ugly Centre City shopping mall.

The importance of the Rest Rooms to local woman was also displayed in 2009 when a party was held in the main room to celebrate 115 years of women’s suffrage in New Zealand. The Daily News reported ‘Organiser Karen Eagles said the famous 1930s building was a “focal point for women to rest”’.

In the end the plaza was redeveloped around the building and the Rest Rooms had a small makeover. The roof was replaced and the exterior walls painted a dark charcoal (‘tarted up’ as the local paper put it).

Inside, the rooms have changed remarkably little. The old care-takers rooms have been updated a little, the interior toilets upgraded, and a men’s loo added on one side. But the main room, with its native timber seating and trim, Art Deco fireplace, and fancy plaster ceiling are intact. The feeling of homeliness and welcoming so prioritised in its design are certainly still there. 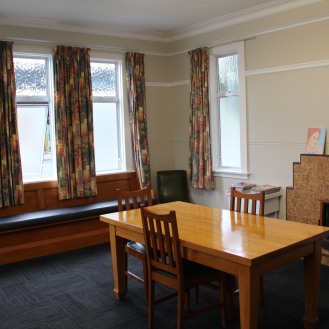 Today the Rest Rooms is still immensely popular. A site visit for this project on a Monday morning encountered many visitors, from women using the facilities to others who were merely waiting for their bus. New Plymouth women still obviously value the Rest Rooms – even if a male council worker I spoke to about the upkeep of the building seemed completely confused that anyone would want to write a history of some toilets!

For more on Kate’s work, please see her website.