Today we are publishing a guest post by researcher Dr Emma Jean Kelly about the recent restructuring of Ngā Taonga Sound & Vision, Ngā Kaitiaki o Ngā Taonga Whitiaahua me Ngā Korero, and the series of losses it brought about.

I’ve had some disagreements in the last year or so with Ngā Taonga Sound & Vision, formerly known as the New Zealand Film Archive Ngā Kaitiaki o Ngā Taonga Whitiaahua. They’ve been pretty public, as you can see here.

As a scholar of archives and the biographer of Jonathan Dennis, the founding director of Ngā Taonga, I was concerned when a restructure was announced internally to the staff last year (2016). Being a Charitable Trust, there was no requirement for public consultation. But being an institution which is mostly funded by the Ministry of Culture and Heritage and holds significant materials of public interest including parts of the TVNZ Archive and all of the nation’s Sound Archives as well as most films, I felt there should be a public discussion and tried to encourage this, as is our right in a democracy.

It got nasty, as these things do. I was told by a member of the board that I was ‘strangely obsessive’ when I asked how many staff would be made redundant when the Christchurch and Auckland offices closed. Those staff, with their massive amounts of experience and knowledge have moved on now, finding other jobs in other places and in some cases, remaining un(der)employed. Some have relocated to the Wellington office. Those staff didn’t think it was ‘strangely obsessive’ that I was asking whether they would retain their employment. I was worried for them personally, but also for the massive amount of organisational knowledge and very specific skills that would be lost if their jobs were terminated. The evidence from similar restructures in Australia have seen huge amounts of knowledge lost resulting in a lack of quality exhibition of materials and service to researchers and other members of the public wishing to look at archives.

Over the period of my 6 year project studying the founder of the archive Jonathan Dennis, I had accumulated various materials from people close to him and had given some of them to the archive. His sister Simon for example had given me a brightly coloured plastic kete which he used to use. I in turn gave it to the Archive when my book was published as a way of giving something back, something personal to Jonathan but also as something that now had connections to me as the person who had written a book about him. The kete was indicative of his unusual (for a Pākehā Kiwi Bloke) approach to fashion. He wore colourful clothes, talked a lot about living in ‘Oceania’ as he liked to call it, visited Fiji regularly and adored Māori iconography, culture and arts. At the height of my disagreements with Ngā Taonga, I requested those items be returned to me. The kete came back with this description of its provenance attached: 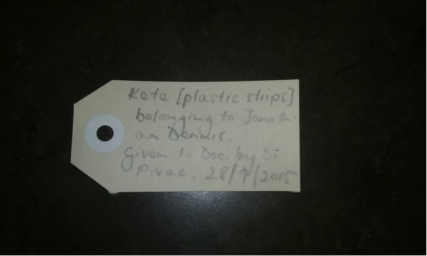 With a little bit of writing on a tag attached to the kete, I had been written out of the history of that object. As well as being a scholar of archives (how they function, why they do the things they do, analysing their philosophies and ideologies) I’ve also worked as an archivist. And so I know that this description should have said that Emma Kelly had gifted this kete, which had been given to her by Jonathan’s sister Simon, to the archive. Di Pivac was the staff member who I handed it to on the day I gave a talk about Jonathan Dennis to the staff.

It seems a small thing, right? But what are the implications of this kind of mislabelling which is actually at the heart of archives? How we name things ensures either their accessibility within the archive, or enables things to be forgotten. Because my name, and that of Jonathan’s big sister Simon who had given the kete to me were not included in the document description, the provenance of that object would have been lost to the archive. Archives have a duty to ensure that materials are accessible to the public, they are not and should not be gatekeepers of those materials or shapers of the information attached to them more than is inevitable; unfortunately often we find archivists become territorial and defensive of the materials they care for, and issues like this mislabelling arise. Or perhaps there was simply no communication between the person I gave the kete to and the archivist who labelled it.

Barry Barclay raised similar concerns about the archive in the 1990s when he found that a term he had helped insert into the (then) Film Archive policy had disappeared from it without discussion. This term was ‘mana tuturu’, which indicates a spiritual element to the materials, it supports a Kaupapa Māori view. Barclay felt strongly enough about the words disappearing to publish the policy complete with the mana tuturu wording in his book Mana Tuturu; Maori Treasures and Intellectual Property Rights (AUP 2005, Appendix ‘Taonga Maori Deposit Agreement’). Barclay described in that book Jonathan Dennis’ ‘stumbling prescience’ in the first years of the archive, attempting as a Pākehā to work with Māori to create an indigenous archiving practice which was acceptable to iwi around the motu. In turn and following Barclay’s example when I published my book on Jonathan Dennis and the early years of the archive, The Adventures of Jonathan Dennis; bicultural film archiving in Aotearoa New Zealand (John Libbey Press, 2015), I reproduced the ‘Constitution Kaupapa of the NZFA 1988’, which was the first attempt to incorporate the Treaty of Waitangi into the film archive’s everyday practice.

It is the details in the archived documents that hold people to account, that ensure we don’t forget how we got to this place we are at now, and ensure that we remember that we walk into the future facing the past. Simon Sigley, a prominent NZ film scholar referred to Barry Barclay at a conference in Film History a few years ago as a ‘religious romantic’, a surprising term to use for an indigenous film maker of world renown who kept the NZ film archive honest and committed to a Kaupapa which supported and celebrated Māori ways of being and doing. At the same conference, Sigley quoted the then Director of the Archive Frank Stark as saying Jonathan Dennis was not involved in the bicultural aspects of the NZFA’s development. I was able to respond at the time by saying that if Sigley (and Stark) read through the newsletters of the Archive from Jonathan Dennis’ time as director they would know this was not true. By publishing the 1988 constitution of the Archive including its commitment to the Treaty of Waitangi, formalised two years before Jonathan Dennis’ resignation from the Archive, I was able to prove their assertion incorrect.

Similar to the description of Barclay as a ‘religious romantic’, I have heard Jonathan Dennis’ fashion sense and his carrying of ketes and wearing of bright colours disparaged by senior staff of the Archive. But I found during my study that Jonathan Dennis’ colourful displays were a strong reaction to the homophobic and conservative private schooling he had received in the south island of New Zealand – he had felt the need to be ‘transparent’ at school to avoid being bullied and ostracised, and so once he left, he vowed never to do so again. I wrote about this in my PhD thesis and book because I felt these were important facts about Dennis which shaped his adult life and the choices he made to champion the marginalised in the Archive.

Jonathan Dennis’ kete and its provenance are part of a lineage of archivists, thinkers, scholars and doers who understand the idea – Ka Haere Whakamua, Ka Titiro Whakamuri – we walk into the future facing the past – and the details of how we got there, who we brought along the way and who we discarded by misnaming or not naming or unremembering matters. And so I remember the staff who have lost their jobs over the last year at Ngā Taonga, the materials that are not being catalogued due to a lack of staff resourcing, and I mourn for the loss of access to these materials with their full stories intact.