Urban historian Ben Schrader has been vocal in his support for Wellington’s Gordon Wilson Flats. His research into the social history of the building supported the Architectural Centre’s appeal against removing the heritage status of the Gordon Wilson Flats from the Wellington District Plan, which would have facilitated the building’s demolition. His work has shown the heritage value of the building has been previously misunderstood and underestimated, and helped (with other heritage and architectural experts) to convince the Environment Court that it was of such significance that it must remain on the heritage list.

Ben has kindly set out his argument for the building’s place in New Zealand’s social history – particularly for the way it documents the fluctuating way in which New Zealanders have envisioned our cities – in more detail below.

Much of what we think of in New Zealand as ‘state housing’ is rows of individual houses, similar but different, set within sprawling suburbs, (as pictured below; in this case in Naenae). But with the Gordon Wilson Flats, and other buildings between 1938 and 1959, the government tried a new approach in the inner cites. The Gordon Wilson Flats were an essential element in a radical scheme that challenged the suburban pattern of New Zealand’s cities and sought to house those who preferred to live in town. It increases our knowledge of not only mid-twentieth social housing but also the contemporaneous debate about shaping New Zealand’s cities. It shows that current issues like urban sprawl and consolidation have a long lineage. The building therefore offers invaluable historical perspectives into present concerns. 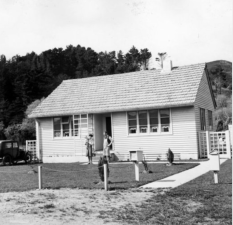 There were a range of factors that led the First Labour government to erect blocks of flats as part of its radical state housing programme, begun in 1936. These included a desire to replace dilapidated central city housing with modern stock; a belief that higher-density housing made more efficient use of expensive city land, and a recognition that not all townspeople wanted to live in the suburbs, preferring instead to be close to their workplaces and city amenities. It was thought this group mainly comprised single people and couples without children; few doubted that families with children would want to live anywhere other than the suburbs. While the emphasis of state housing remained suburban provision for nuclear families, the government saw it had a moral responsibility to provide for other family groups as well. Inner city flats would meet this need.

Planning for the Terrace Flats (later called the Gordon Wilson Flats) began in 1943. But, due to the government’s determination to provide suburban family homes after World War Two, the project was delayed until the mid-1950s when the National government resurrected it.

Elected in 1949, National had continued its predecessor’s state housing programme, but sought to cut its cost through using more economical building materials. It also wanted to reduce urban sprawl by making more intensive use of urban land. This became a pressing issue in the late-1950s as public concern over the loss of prime agricultural land to suburban housing as well as the high cost of servicing these new communities grew.

By late 1954 the Ministry of Works had modified the building’s original design to reflect advances in architecture and engineering. The building comprised 75 two-bedroom maisonette (two storey) flats and 12 bedsitting (single floor) flats. The maisonette plan was very modern and highly unusual in the New Zealand context. It had the advantage of being both architecturally modern and economical. This was because the floor within each maisonette was of timber rather than concrete, reducing the weight of the building and making its construction cheaper. Each flat had its own bathroom – a novelty for many people who were living in shared housing at this time – but the laundry was shared amongst all the residents, and was on the rooftop.

As with other state housing rentals for the building was set on a cost-recovery basis (they weren’t subsidised). Due to the higher construction costs of the flats compared to houses, the rents were steeper than for other state housing. However, as the Corporation explained this would be offset by lower transport costs and travel times to work. By the end of 1958 the flats were nearing completion. The Evening Post expected there would be a rush of applications for the accommodation and asserted the building’s modern construction made it ‘one of the safest in any earthquake region in the world.’ 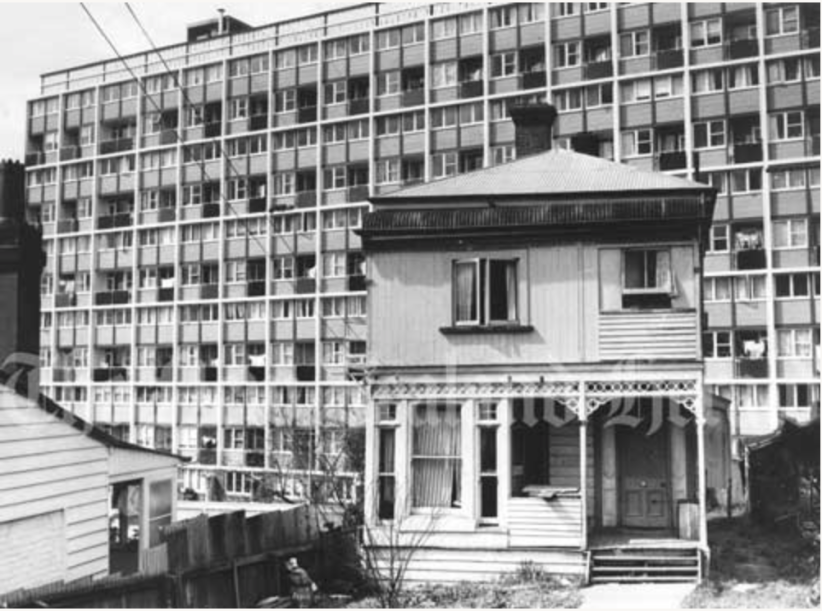 One of the special features of Gordon Wilson flats is the maisonette design (each flat has two floors, one with living and kitchen spaces, and the other with bedrooms). The only other example of this was the Upper Grey’s Avenue flats, in Auckland, here deliberately contrasted against the old Victorian housing it has replaced. New Zealand Herald, Reference: 120810NZHFLATS.JPG

The building also provides a rare and fascinating perspective on how a socially diverse mix of tenants lived alongside each other and negotiated social relations in a high-density environment – or ‘vertical community’.

On 18 March 1959 the Minister of Housing, William Fox, inspected the now completed flats, a few hundred toured the building and 500 applications were made to live in the flats. 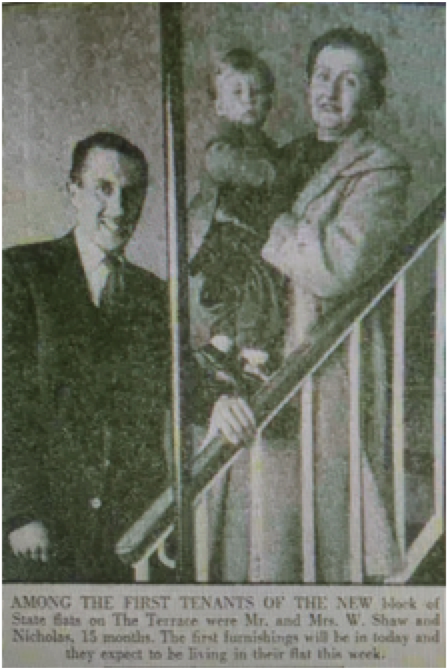 A newspaper image of some the first tenants move into the Gordon Wilson Flats in June 1959: Mr and Mrs W. Shaw and their son Nicholas (Evening Post, 9 Jun 1959, p. 14)

In June tenants began moving in. All the bedsitting units had been allocated to working women in their forties or fifties who had previously been living in rooming houses. Most of the maisonettes went to couples from their early twenties and up to the mid-fifties. Many had one or two children. A few single parents with children were also accommodated. All the families had been living in shared or congested housing and having their own place was a boon. The occupational profile of tenants was diverse and included: milkmen, bakers, plumber, clerks and civil servants.

The Evening Post reported the upper-storey flats were the most popular because they had the best views. One woman declared: ‘I LOVE the bathroom’ and pledged to sleep in it. Previously she’d only known ‘share-bathrooms’ (in rooming houses). The newspaper thought demand was high enough to justify further blocks. It noted numerous single men had applied for the bedsitter flats even though they were ineligible and many couples had applied for the maisonettes in the view of marrying after finding suitable accommodation.

A fulsome history of the Gordon Wilson Flats following their opening is not presently possible, but fragments of the story can be constructed from official files. These suggest that during the early years most tenants appeared satisfied with their accommodation. At the end of 1959 the SAC reported that it was finding no difficulty in finding suitable tenants and it had a waiting list of interested applicants. There were, however, a few complaints about noise, people taking car parking spaces and boisterous children. In 1973 the local MP, David Shand, wrote to the SAC Minister, Robert Tizard, saying tenants had complained to him about the noise generated by the large number of children living there. The Minister replied by saying the SAC had placed families with children in the flats due to the lack of family houses elsewhere. He said there was high demand for tenancies in the complex and that there were few requests from sitting tenants for transfers. He also noted that ‘where there are healthy children there must be an element of noise.’

Despite the unmet demand for inner city flats, the National government scuttled plans for further such blocks. The precise reasons for this needs further research; it could be it saw them as an affront to New Zealand’s suburban housing tradition. Henceforth, the state refocused its efforts on suburban housing provision, addressing issues of urban sprawl by building more medium-density housing. Central city social housing initiatives were largely left to local councils, albeit often funded or subsidised by the state. Wellington continued to erect high-rise blocks of flats through to the 1970s, but other councils preferred to concentrate on constructing low-rise developments instead.

The structure is also important in the history of building science. It was almost certainly the first high-rise residential New Zealand building to have earthquake monitoring equipment installed in it and have scientific tests carried out on it.

Knowledge that the building was being engineered to better withstand earthquakes had led the Department of Scientific and Industrial Research (DSIR) in 1955 to enquire about putting seismic monitoring equipment in the building. The institution was installing acceleragraphs throughout New Zealand to record seismic ground motions and thought it prudent to put instruments in suitable buildings to measure building movements and stresses during earthquakes. The Ministry of Works supported the idea. As it explained: ‘The multi-storey flat building is an ideal type for this purpose as it is tall, slender and symmetrical and is located in an active seismic area.’ The SAC agreed and strong motion accelerators and strain gauges were installed during the building’s construction.

The DSIR asked that one of its officers be allocated a flat in the building to monitor the equipment, saying the officer was akin to building custodian who was given a flat so he could do his job properly and that ‘There is no question of the value of the results that can accrue from this very long-term undertaking. The loss to New Zealand from a large earthquake is gigantic. We are using the Terrace flats not to find how the Terrace flats would behave for their own sake but to find how to make all future buildings in New Zealand safe against earthquakes’.

Eventually the Laboratory’s officer succeeded in gaining a flat in the building. Seismic tests were subsequently carried out in the building and several scientific papers published as a result. It seems almost certain that these were the first carried out on a residential high-rise building in New Zealand.

A newspaper image of the machine used by seismologists for earthquake reaction tests on the Gordon Wilson Flats in 1964.

The building is also significant because it is a powerful symbol of New Zealand’s mid-twentieth century mixed economy, where government interventions encouraged and supported private enterprise. The building promoted a housing model for private builders to copy and, through the installation of a gas energy supply, buttressed the private gas industry. During the 1950s consumption of electricity in New Zealand increased significantly as the economy grew and households bought more domestic appliances. Sometimes supply could not meet demand, causing blackouts. The government therefore decided to install gas heating in Gordon Wilson ‘to assist the gas industry and lighten the load on the electrical supply’, even though it was more expensive. The decision highlighted the interventionist disposition of mid-20th century New Zealand governments, where intervention in one economic sector (the housing market) was used to manage another (the energy market).

Finally, the building is significant as it was named for one of New Zealand’s most gifted and influential architects: Government Architect Francis Gordon Wilson, the building’s chief designer who had recently died. It remains an important and fitting memorial to him. In a press release, the Minister of Housing, William Fox, stated that he ‘has done as much or more than any other individual to raise the standard of domestic architecture throughout New Zealand, and that ‘every fine building the Government has erected in recent years bears the imprint of his vision and skill’.

In my opinion the Gordon Wilson Flats has high heritage value, foremost because it is a tangible expression of the 1950s debate over the future shape of modern New Zealand’s cities. At stake was whether the low-density suburban pattern of the past would continue unchecked or if a new high-density mode of living would arise to redefine cities. Even though the suburban model emerged the winner, the building continued to be a prominent marker of an alternative vision.

Schrader, Ben, We Call it Home: A History of State Housing in New Zealand, Auckland, 2005.