Another set of interesting buildings have been given funding from the Wellington City Council’s Built Heritage Incentive Fund. The ten buildings (listed at the end of this article) jointly received over $280,000 in funding to carry out work on heritage buildings – in particular earthquake strengthening. A number of the buildings are in historic neighbourhoods such as Newtown and Cuba Street; their strengthening will also increase the city’s resilience in an earthquake.

I have previously been involved in writing Conservation Plans for two of the buildings that are receiving funding in this round.

The first is the Karitane Products Society Factory building in Melrose, Wellington. This building was the manufacturing centre for Karitane baby milk products for 60 years. The factory was originally built by Sir Frederick Truby King, making recipes of his own devising and using machinery he invented himself. King handed over the factory to the newly-formed Karitane Products Society in 1927, and that company operated it until its closure in 1988. The factory was built high up on the Melrose hill beside King’s own home, and the Karitane Hospital, and surrounded by King’s beautiful gardens.  King is pictured above in the building above, with the factory’s manager.  Note the sloping angle of the roof behind them. 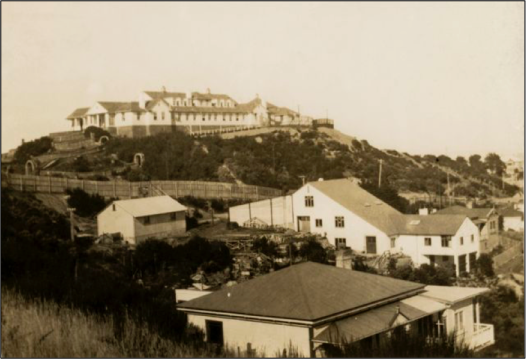 Melrose hill with the Karitane Factory building (with the sloped roof), and above that King’s house and the Karitane Hospital, c1930s.

The building was designed to be an ‘ideal factory’ by William Gray Young in 1923. Truby King wrote that the Melrose hill, 400ft above sea level, was perfect for the factory: ‘surrounded by trees and shrubs, and at some considerable distance from any residential area, the atmosphere is practically free from undesirable elements, such as smoke and dust.’

The plan for the building when first built

The design of the factory took advantage of the steep hillside. It was built over three internal levels down the hillside; the machinery using the gravity led system to operate. The western end of the ground and basement floors were (and still are) open to the floors above and below, to allow the pouring of the liquid down into the machinery below as part of the emulsifying process. As the Evening Post described it in 1927, ‘the raw material comes in on the top floor and the finished product disappears down the road by lorry from the bottom floor’.

The building was then enlarged in a piecemeal* fashion in its first 14 years, and then went under a very significant alteration/addition in 1938, designed by the architectural firm Swan and Lavelle, at which time the original factory building was essentially wrapped up inside a new Art Deco façade. The building in its new Art Deco facade

It then remained with very little change until 1988, when it was sold and then  transformed into a design studio, and then into apartments.  Its exterior has changed very little since 1938, and remarkably, some of the factory machinery still remains in the building.  You can visit the surrounding park and gardens, which are now owned by Wellington City Council (but not the factory building, which is privately owned).

The other building I have worked on is Philosophy House, now owned by the School of Philosophy in Aro Street, but which was originally the Training School for the Salvation Army. The Salvation Army first arrived in New Zealand in 1883, and this building was built in 1913-1914, and in the years following it provided training and a home for months at a time for thousands of Salvation Army cadet officers from around the country.

When first built accommodation was included for 50 students, 25 of each gender. Rooms were also provided for accommodation for six teachers, and a suite for the principal, and rooms for a cook and housekeeper. The ground floor level contained a double-height lecture hall, central open-air quadrangle and a single-storey dining hall in the middle, flanked by cloister walks and wings. Leading off the dining hall was a single story kitchen block containing the kitchen and scullery. The first floor plan is a u-shape, formed around the lecture hall, quadrangle and dining hall. Two staircases, one on each side of the building, provided access to all levels, with large floor to ceiling windows at the landings.  Over the years, as the number of students increased, additions were made to the rear. The School of Philosophy, an international organisation, bought the building from the Salvation Army in 1982 and has been there ever since.

* for ‘piecemeal’ read: ‘it was one of the most complex buildings I have ever worked on and gave me nightmares trying to sort out all the incremental changes!’.