For International Women’s Day, I’m sharing some of the research I completed about this building, the Barrett Street Nurses’ Home in New Plymouth.  It tells the story of a space planned, paid for and inhabited by women.  It is also a useful lesson for heritage professionals like me about  how the smallest and humblest details of fabric in a building can also be the most pertinent and interesting. Unfortunately the building has been left neglected for many years, despite its heritage importance, and has been the frequent victim of arson and vandalism.

As World War One came to an end the existing New Plymouth Nurses Home was in a shocking state – the Chair of the Hospital Board called it ‘sunless and wretched’, with some rooms filled up with three nurses per room.  All working nurses at this time had to live in the accommodation supplied by the hospital; it was not acceptable to be married or living at home while nursing.  They worked seven day shifts, eight hours a day, with very little leave (one nurse who entered the training school in 1927 recalled that her first day off was in 1930 when she completed her final exams).

Despite the parlous condition of the old home, because of the budget constraints caused by the war the government wanted to postpone any replacement.  Public pressure to give the nurses a new home to honour their work during the war was further supplemented at the end of the year.  In the space of two months, November and December 1918, the Taranaki province was devastated by the Spanish Influenza epidemic. In New Plymouth alone (not counting the cases in outlying districts) there were 2,700 cases of flu, with 81 deaths in hospital. On the worst day there were 230 patients in hospital, with many others being treated in emergency temporary hospitals elsewhere. Every single New Plymouth hospital nurse but one caught the disease, many were seriously ill, and four died. One of these who died was a nurse who had heeded a call from Auckland Hospital, desperate for help, and then caught the disease on her return to New Plymouth.

The devotion to the job shown by the nurses during this period made the decision to construct a new home for the nurses an emotional one, and one difficult to delay any further. A memorial plaque for the four nurses who died was placed in the one of the hospital wards, and changes were also made in their memory to the nurses’ home itself, during construction.

As a result, tenders for the building were issued in December 1918 by the New Plymouth architecture firm of Messenger and Griffiths.  The matron was given the chance to tour other nurses’ homes to find the best

Memorial Hall
In April 1919 the secretary of the Taranaki Hospital Board wrote to the Department of Health to say that ‘a certain gentleman’ had written to him to suggest a memorial ‘in memory of fallen soldiers and nurses during the war and the recent epidemic’ be erected in conjunction with the home – in the form of a recreation room for the nurses.

This decision is very important because, by this point, no discussion had begun about any other war memorials in New Plymouth, and in some reporting this was to be the war memorial for both the soldiers and the nurses in New Plymouth. The Hospital Board, having had promises of funds from one area of Taranaki to help pay for the memorial room, wrote to all the others to ask their feelings. When Bell Block and surrounding districts were considered what they would do for a memorial, they noted that they understood that New Plymouth had decided to use the nurses’ home project as its war memorial project.

The memorial hall is also notable as the government – particularly Sir James Allen, who was acting Prime Minister in these months after the war – was vehemently opposed to ‘useful memorials’, arguing instead that ornamental statuary was a much more suitable memorial. As a result of his stand, and despite many people arguing that in fact useful memorials would be a better way to honour the dead, Jock Phillips’ study of war memorials has shown the in fact surprisingly few such ‘useful memorials’ were built after the First World War. This room is one of the exceptions. The Memorial Hall, in late 1950s. Note the stained glass window, the piano on a platform, and the Honour’s Board behind

Tiles
Another change was made during construction. The Medical Superintendent at the Hospital urged the Board to change its mind about the use of coloured rough concrete on the floors in the bathrooms and kitchen block, and urged them to use tiles instead. He said that ‘from the hygienic point of view, as well as from the lessened labor required tiles were infinitely superior. Coloured concrete had been tried in hospitals, and it was failure, wearing badly and requiring continual cleaning. It seemed a pity not to have the interior equipment in keeping with the fine exterior and on modern lines’.

His suggestion was turned down by the Board as a matter of cost, but the next day a writer to the newspaper signing themselves ‘One Willing to Contribute’ agreed with the doctor and said that coloured concrete wore very badly and that ‘the nurses do great and often very unpleasant work, and do it cheerfully and their comfort should be considered’. The writer suggested the community could fundraise for the tiles. The next Board meeting reported that the nurses themselves had offered to fundraise for the tiles; the Board agreed to pay half of the cost if the nurses could raise £200, for which they held a ‘Nurses Saturday’ with street collections and stalls on the streets of New Plymouth.

The reporting of this event helps to illustrate the sentiment and context surrounding a building such as this one: the Taranaki Daily News reported that on the day the hospital nurses, ‘that splendid body of women whose daily task is the care and comfort of their fellows’ would be raising funds ‘on that spirit of sacrifice which is a notable characteristic of the hospital nurse’. It reported that the tiles were not a luxury but would ‘save a great amount of labor, they will make the nurse’s lot a little less difficult than it already is, they will make the strain on her health less severe, and they will assist to produce a brighter and happier home’. During epidemics, the nurses locked in the home to stop the spread of germs, and so had to do their own cleaning in the home: ‘then will be the time when the provision of tiles will be of great material assistance to them’. The nurses raised more than the required amount, resulting in the floors of the bathrooms and kitchen being tiled. From modern photos it appears that a number of spaces in the home are still covered in these tiles.  [This is the sort of thing that a modern architect adapting the building would never know was important without the work of a historian]. 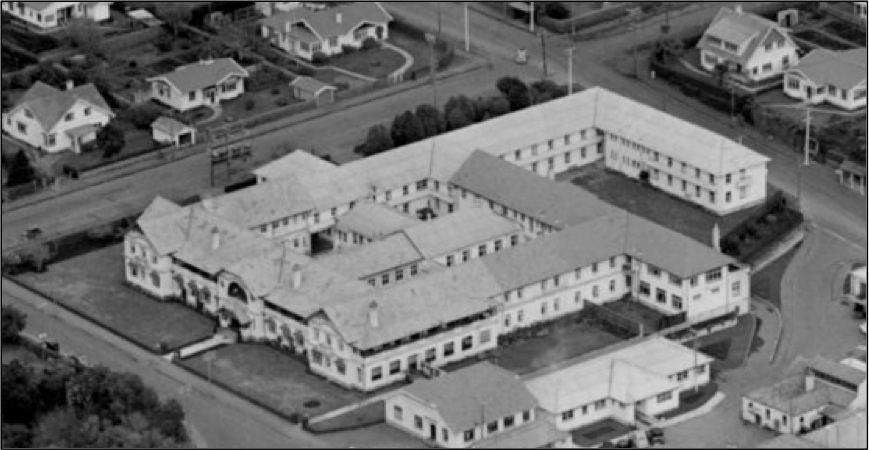 The building got progressively larger as the hospital increased in size and more nurses were employed.  This is the building in 1949, with all of the main wings now in place.

Social Life
As the nurses were required to be in the home for most of the time they were not working, the social life of the nurses largely revolved around the nurses’ home. 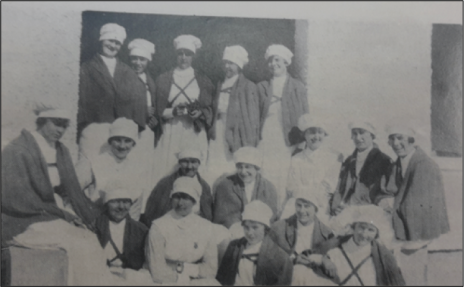 Nursing staff in 1921 – the first nurses live in the home, taken outside the new home.\

Just as the hospital wards were run with military lines, the nurses’ home was also a place of rules and hierarchy. It was a highly controlled space; the matron of the hospital was also in charge of the home – making the nurses’ employer in control of them in both their living and working hours, and the rules and curfews were rigorously enforced. Nurses could be ‘gated’ (have their leave cancelled) for breaches of discipline.

Curfews were rigidly enforced (although there were also plenty of tales of entering the building via the fire escapes at the back of the building after curfew!) As they moved up the hierarchy and became more senior, their hours of leave away from the home per week slowly increased. Nurses has to be in bed by 10pm until they had passed their Junior State exam, when they could be out until 10.30, and ‘dance leave’ was granted only on personal application to the matron. Not until their fourth year were trainee nurses was given 11pm leave. In the early years, trainee nurses worked seven days a week.

Women who lived in the home often talk of the companionship and support that came from living communally like this, and the life long friendships that were formed while living there.

Nurses were not allowed radios in their rooms for the first six months of being in the home, and on the day they arrived, their possessions were inspected to ensure that they had brought everything they had been told to bring. The nurses wore uniforms in the home (different from the one they wore in the wards), even when off-duty.

Those in charge of the day-to day-management of the home were the Home Sisters. One history of the nurses’ home noted that:

these long suffering women did constant battle with young women bent on provoking the old adage that rules were meant to be broken. To be caught red-handed on the fire escapes late at night meant the inevitable trip to the Matron – the punishment, a leave cut, or worse.

Dances, including at the nearby large social hall the Star Gym, were popular, when they could get leave to go. The swimming pool and tennis and netball courts provided for the nurses at the home were favourite places to spend time. The home had a number of different social clubs, organised by the Student Nurses’ Association, and the Nurses’ Christian Union was also an active part of the social life of the home.

The Nurses’ Home Alpine Club was also a popular recreational option. The club was tragically involved in the 1953 accident during the winter climb of Mount Taranaki, at the time the worst alpine accident in New Zealand history. The climb had involved 31 climbers, including some of the most experienced Taranaki climbers. Four of nurses, Janet Cameron, Julie Cassels, Ellen McBeth and Ruth Caldwell, along with Taranaki Alpine Club members Keith Russell and Andrew Lornie, were killed when, roped together, they fell on the mountain, or in hospital afterwards. Nurses who survived the incident later recalled that they were told not to talk of the accident; one recalled that the fellow nurses who had not come of the trip learned of what had happened only from newspapers. In 2000 a plaque was added to the Base Hospital’s chapel for the four nurses who were killed. The Nurses’ Home Alpine Club, off on an outing.

Nurses’ graduation balls were held in the memorial hall at the home, and were an important part of the annual calendar. The balls were closely supervised by the matron, and even the late 1950s the name of the proposed partners still had to be submitted to the matron for approval, and if the men were not approved, they were no allowed to attend.

The building is now neglected and standing empty, and the victim of frequent arson attacks and vandalism. 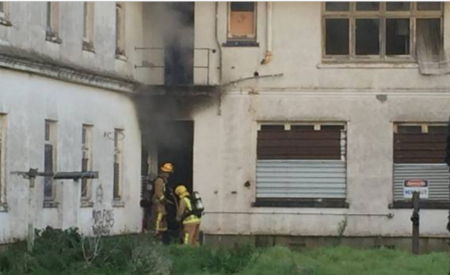 Above, the parlous state of the Barrett Street Hospital today, and below, the historically important Memorial Hall – nationally important but negelcted. 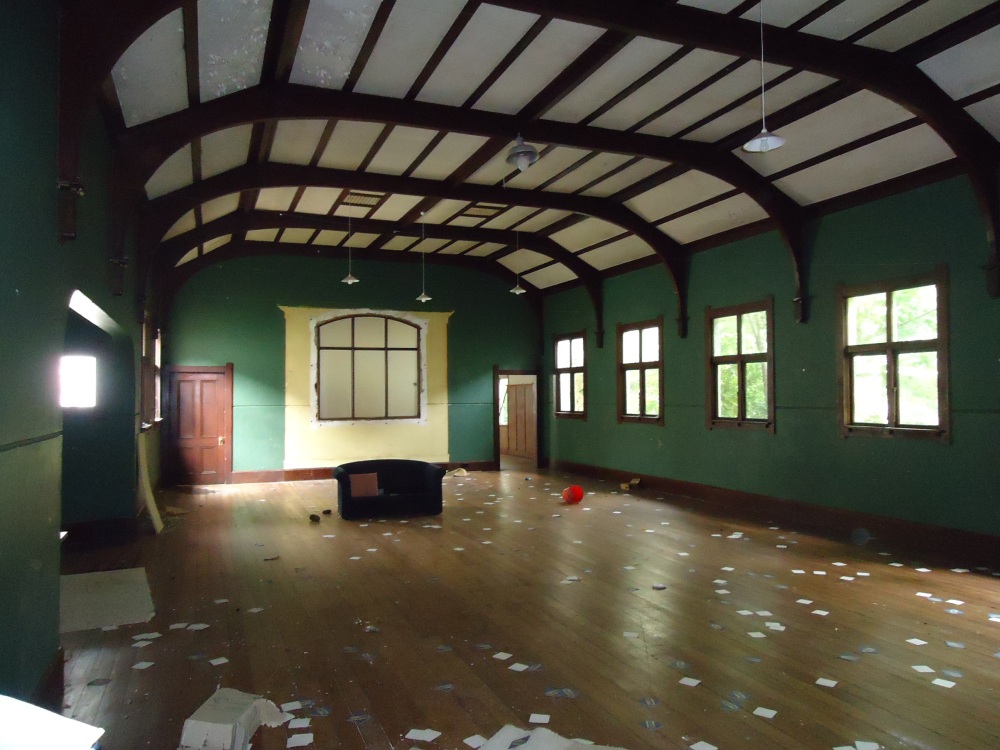