Well the scaffold is up, and the main college building is coming down.

For some time we have been tracking the attempts by a number of heritage advocates to save the Erskine College buildings in Island Bay, Wellington.  Our last update in June 2017 was here. At the time of our last update, a mediation was underway between SECT (the Save Erskine College Trust), the Wellington Company (the owners of the building and the large surrounding site), and Heritage New Zealand, in the hope that the college buildings could be saved, during the massive $30 million redevelopment of the land, which includes the construction of 94 new dwellings.

However, these discussions broke down and the legal proceedings continued. The Environment Court issued another decision in January 2018.  The decision acknowledged that there are two buildings of very high heritage quality are found on the land – the chapel and the former convent building (often called “the main building”).  Nevertheless it gave conditional approval to The Wellington Company to demolish the main building, on the basis that the company would then retain, strengthen, restore and reuse the chapel.  During the hearings, The Wellington Company has verbally agreed that it would provide immediate strengthening of the chapel, prior to all or most other development activity on the land.

Since then a number of step-by-step interim decisions have been issued by the Environment Court, in order to try to resolve the issues between the parties, which, as it says, were ‘seriously at loggerheads’.  A series of such interim decisions were issued in January, March, May, July and August of this year.

In the meantime, work began on the garden and landscaping, with many massive trees being felled.

These interim decisions from the Environment Court have now got to the point where the Wellington Company can begin to demolish the main building.  The final version of the consent given by the Court can be found here.  It provides permission to demolish the main building, but commits the Wellington Company to both ‘accelerated strengthening works’ on the chapel and its ‘restoration and beneficial reuse’. It goes on to say that the work on the chapel must result in the creation of a ‘high quality, functional place that people can use and appreciate for its conservation heritage and values’. It also requires the issue of the western facade to be treated ‘sensitively’, as the court was concerned, as were the heritage experts who had given evidence to the court, about the massive glass screen that is proposed for the chapel’s western facade, which had been designed to cover the area where the main building currently connects to the chapel building. 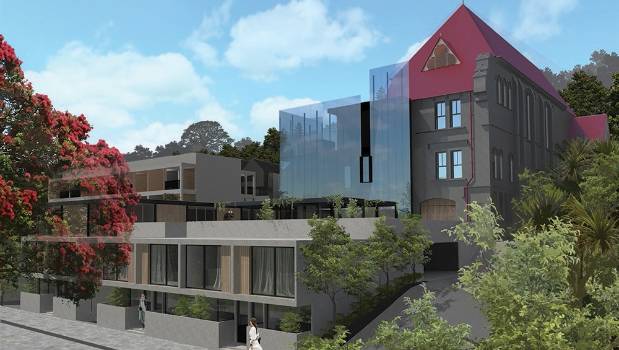 The proposed glass screen on the western facade of the building, so unpopular with heritage experts.

The Wellington Company has been required to pay a large bond (which will be held by Heritage New Zealand) which holds them to their agreement to strengthen, and make waterproof, the chapel building.  The court has had to reach decisions on how large the bond should be, and to what level of work needs to have been completed on the building before the bond is given back (e.g. should the chapel be just ‘safe’, or should it be ‘functioning’?), and what will happen if the work doesn’t proceed (there is now agreement that Heritage New Zealand would be permitted to ‘step in’ and complete the works itself if it is not done by the owners).

The site this week, with the deconstruction of the main building underway.  The chapel is shown on the left.

So here we are, at the end of the battle to save the main building, which is so well-remembered by many of the girls who were educated there (see the recent article from City Councillor Nicola Young who was once the head girl of Erskine College).  It is a salutary lesson in the heritage protection our heritage buildings really have in New Zealand.  This building had the trifecta – it was listed on the city council’s district plan as a heritage item, it was listed by Heritage New Zealand as a Category 1 historic place, and it was the subject of a Heritage Order.  And yet it still comes down.

I thought I would conclude with the summary of the importance of the site and complex of buildings written by Heritage New Zealand in 2009:

Erskine College (Former) is of outstanding heritage significance. As a now-rare physical testament to the work of the Society of the Sacred Heart in New Zealand, the place tells a story of the development of Catholic education in this country and is associated with numerous significant historical figures as well as being a place of worship, spiritual retreat and celebration for generations of pupils and Sacré Coeur religious, some of whom are commemorated within the site. The subject of huge community esteem, the place is held in extremely high regard by former alumnae, members of the Catholic community, local Island Bay residents, heritage professionals and other interested parties. The high social value of the place is most strongly demonstrated by the extensive campaign to protect the entire site, which was spearheaded by the formation of the Save Erskine College Trust and its official approval as New Zealand’s only non-government heritage protection authority.

The main convent building, Chapel of the Sacred Heart and associated additions are also of special architectural, cultural, technological and aesthetic significance as fine examples of the work of prominent architect John Sydney Swan. The Chapel in particular is regarded as the finest Gothic interior in New Zealand, and its elegant proportions an offer exceptional acoustic quality which has seen many notable musical performances. The other buildings of the complex also have lasting associations with many cultural activities, having been used as the site for the creation of various artistic activities and as a venue for some high profile cultural events.